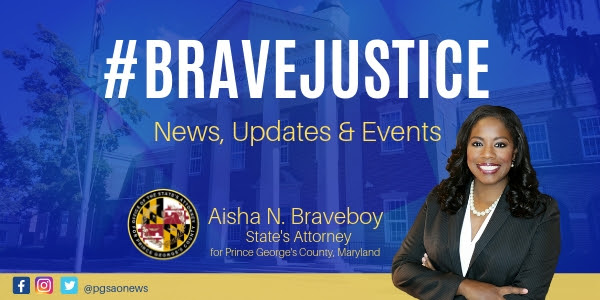 Prince George’s County State’s Attorney Aisha N. Braveboy announces that since March 1, 2020, the population at the county’s detention center has been safely reduced by 150 inmates as a result of the office’s “Operation Safe Release” initiative. The State’s Attorney’s Office continues to focus its release efforts on inmates held pretrial on low-level offenses and those close to the end of their sentences.

“Since the start of this pandemic, we have been concerned about the possibility of infection at the detention center and have been actively working with the Office of the Public Defender and the Department of Corrections to reduce the population.  My office has put in place a ‘safe release program’ for inmates as a proactive way to reduce the spread of this deadly virus in the jail,” Braveboy said.

Under Operation Safe Release, each case is reviewed to determine the appropriate recommendation for release.  The goal is to safely and judiciously reduce the inmate population, prioritizing everyone’s health and safety during the coronavirus crisis.

There were 718 inmates in the county’s detention center on March 1st. To date, there are 568 inmates who remain in custody.

Additionally, approximately 792 individuals have been released from the detention facility to include those defendants released during their initial appearance before a Commissioner, which occurs shortly after their arrest.

“The State’s Attorney’s Office is actively participating in these initial appearance hearings and making recommendations for the release of certain defendants based on the nature of the pending charges and their criminal history,” said State’s Attorney Braveboy.